My Chemical Romance perform on 'Yo Gabba Gabba' 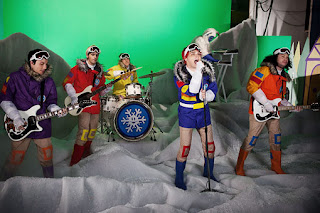 My Chemical Romance are set to perform on Nickelodeon's Yo Gabba Gabba!'s "A Very Awesome Christmas" episode December 18 at 8 p.m. on Nick Jr.

However, fans need not wait until December 18 to hear "Every Snowflake's Different (Just Like You)," the original individuality-celebrating song the band played for the show, thanks to an Entertainment Weekly EXCLUSIVE VIDEO of the performance!

In 2009, MCR vocalist Gerard Way publicly expressed his desire to perform on YGG! in an interview with MTV:

"I have this secret desire to do a children's show, and then I saw Yo Gabba Gabba, and I was like, 'Oh, this is genius. This is better than anything I could've come up with,'' Way laughed. 'I watched [Devo mastermind] Mark Mothersbaugh draw a puppy, and I was like, 'This is the best thing I've ever seen.' I'm really aiming to get [My Chem] to perform a song about lemonade on Yo Gabba. ... I'm cooking this lemonade song up in my head as we speak.'

PS: This song and video fill me with unimaginable joy and giddiness. Haha!

Gerard Way has posted a blog entry about MCR's Yo Gabba Gabba! appearance, which includes his sketches of the band's costumes for the show!

"We talked a lot about Hoth and we definitely wanted a Yeti," Way said of the concept and his conversation with series creator Christian Jacobs.