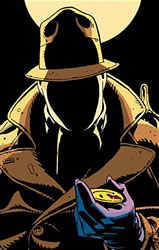 As you guys know from my expressing it in previous blogs, I am very excited for The Watchmen movie, but I am also almost equally excited for the soundtrack. But, first thing is first: the movie.

Many people have been asking about its release date. Despite court controversy between WB and Fox (read), WB still intends to release the movie on the originally scheduled date of March 6th. Whether this will remain so, we have yet to see, but I want to talk about tunes, as always.

The soundtrack for The Watchmen movie is scheduled for release on February 24th, and will feature My Chemical Romance's cover of Bob Dylan's "Desolation Row". Those of you who have read the graphic novel will know that this song is quoted at the end of a chapter. My Chem were asked to record the song for the film's closing credits. So, you know I'll be the one in the theatre lingering behind for the credits.

A couple weeks ago, the band recorded a video for the song. Those around the set in L.A. reported having seen angry extras fleeing the building in which the video was mainly shot. Because of Watchmen director Zack Snyder's directing the music video, confusion spread as to whether the new My Chem video was actually extra shooting for the movie.
Photo from: MyChemicalFreak.Com
I can't wait for the video nor for the soundtrack! This is all so very exciting, especially to us MCR fans. I was fortunate enough to see the band play their Dylan cover at one of the shows I went to on their 2008 tour. On the second night of their playing in Chicago, they treated us to a little "Desolation Row". I couldn't find any really good videos from that show, but I found this clip of the song from their Vegas stop in March (which I almost went to, but ended up having extreme plan-changes. Grrr).

Keep watching for Watchmen updates. As soon as I can find a track-listing for the soundtrack, it will be here.

Anonymous said…
I recently came across your blog and have been reading along. I thought I would leave my first comment. I don't know what to say except that I have enjoyed reading. Nice blog. I will keep visiting this blog very often.

Cassie The Venomous said…
Thank you so much for reading. This just made my day! :}

Anonymous said…
love the new mcr rift,,, thanks your blog really was grand.
i've met the boys and they are sooo nice i cant wait to see them next time they tour.
sharree
January 27, 2009 at 12:39 AM

Thank you so much for reading! I agree, it's going to be great when they tour again. I can only hope to meet them again, they're great guys.